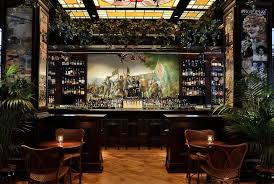 ATLAS Bar is excited to announce the arrival of Jesse Vida as ATLAS’ new Head Bartender.

With over ten years of bartending and bar management experience across San Francisco and New York, Jesse is now an integral part of the team at ATLAS in Singapore.

A passionate mentor and inspired leader, ATLAS looks forward to welcoming Jesse to set a strong direction behind the bar and across the organisation. His drive for excellence and passion for providing an outstanding guest experience further elevates what ATLAS is known and loved for.

Previously part of the award-winning teams at Booker + Dax and Dead Rabbit, Jesse has most recently led BlackTail to a place on the World’s 50 Best Bars list whilst also being awarded “Best New American Cocktail Bar” at The Spirited Awards at Tales of the Cocktail.

ATLAS is excited to welcome Jesse to the team to continue the great work done so far in making ATLAS a world-class home for fine drinking. The ATLAS team looks forward to you joining us in welcoming Jesse.