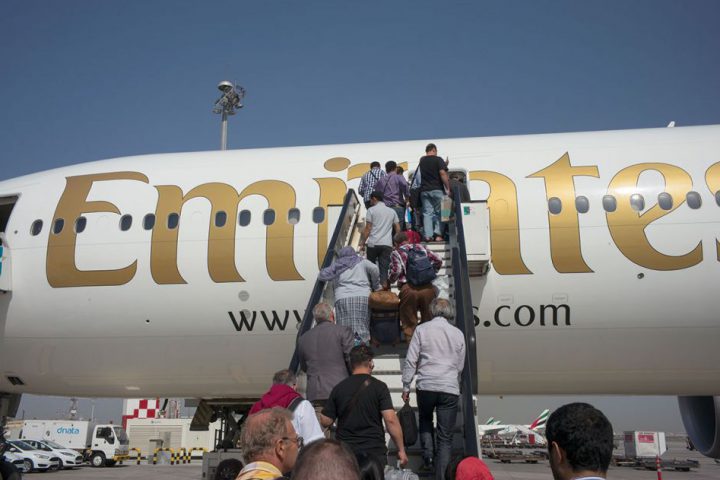 Emirates flights with Live TV will screen the UEFA Europa League Final on May 29 and the UEFA Champions League Final on June 1 live on the dedicated in flight sports channel, Sport 24. With two all-English finals, the airline has made special arrangements to ensure all the 23 Emirates flights operating to and from England during match times are equipped with Live TV. This includes flights to and from London Heathrow, London Gatwick, London Stansted, Manchester, Newcastle and Birmingham.

Stadium in the Sky

Emirates currently has 175 aircraft equipped with Live TV including all Boeing 777 and select Airbus 380s. An estimated 70,000 Emirates travellers could be watching the finals mid-flight, making Emirates’ “Stadium in the sky” comparable in capacity to the Olympic Stadium in Baku where the Europa League Final will be played and the Wanda Metropolitano Stadium in Madrid where the Champions League Final will be played.

Emirates will also be screening the matches live on the 55-inch screen at the iconic onboard lounge on select A380s. Customers travelling in First and Business can join other football enthusiasts at the most popular social spot at 40,000 feet and cheer on their favourite teams.

On Emirates A380s that do not feature Live TV, customers can keep up to date with all the action by logging on to the complimentary Wi-Fi for score updates. Wi-Fi connectivity is available on all Emirates aircraft. Customers in all cabin classes receive 20MB of free Wi-Fi data or unlimited use of messaging apps for 2 hours allowing them to log on and stay in touch with friends, family or colleagues. Emirates Skywards members enjoy special benefits depending on their membership tier and class of travel, including free Wi-Fi when travelling in First Class or Business Class.

Sports fans travelling over the next month can look forward to watching more events live on Sport 24 – such as the NBA Finals, the French Open, and the FIFA Women’s World Cup Final – while traveling with Emirates.

In addition to live TV, ice, Emirates’ award-winning inflight entertainment system, has over 4,000 channels of on demand entertainment for travellers to choose from including the latest blockbuster movies and TV shows and for sports fans, a wide selection of on demand sports content and sports documentaries.

Flights to and from England during match time (all times stated are in GMT):

UEFA Europa League Final on May 29

About Emirates
Our Media centre contains all of our business updates, including the latest press releases and articles and our contact details.

The Emirates story started in 1985 when we launched operations with just two aircraft. Today, we fly the world’s biggest fleets of Airbus A380s and Boeing 777s, offering our customers the comforts of the latest and most efficient wide-body aircraft in the skies.

We inspire travellers around the world with our growing network of destinations, industry leading inflight entertainment, regionally inspired cuisine and world-class service. Find out more.